Jhanvi asked me to help with editing a text file recently. She had a file in the format

and needed to convert it into the format below

There are multiple ways, one can do this. Here is how I did this using Notepad++, an open source text editor. I used the regular expression capability of Notepad++ it’s search and replace function.

Screenshots from the operation

The data in it’s original format

Data after the first search and replace operation

Data in the final format

[UPDATE] Wireshark works without any issues as of version 1.2.3. This release includes WinPcap 4.1.1, which has support for Windows 7 and 2008. Looks like the issue was with the drivers not being signed digitally.

I recently upgraded my laptop to Windows 7 RC from the beta version I was testing earlier. As part of installing my standard set of tools, I tried to install Wireshark (open source network capture tool), and ran into an error due to the UAC security settings. Essentially, Windows was blocking the install of WinPcap (network capture driver). I solved it by enabling compatibility mode on the install executable. Here are the steps to install Wireshark on Windows 7.

P.S : WinPCap is apparently going to come out with a new version soon that is compatible with Windows 7.

The receive and send buffer seem to do the trick.

I ran into a challengeÂ  recently, when I tried to connect to my IM services (Yahoo, MSN, AOL, GTalk) using Pidgin in a secured network. For some reason, the network administrator thought that he/she should make life hell for people trying to log into IM. I will have a whole new rant about companies trying to lock down networks thinking they are making the employees productive..

Here’s what I did to connect to my IM services.

Ran into an interesting issue at work today and wanted to document it. We had a rouge process in one of our applicatoins and it was trying to send e-mails via one of our mail gateways at an alarming rate..There was no customer impact, since the mail server was rejecting all the connections. But the high number of connections were causing a strain on our firewalls..

If this was Linux, we would have done something simple like adding a route to point all the traffic destined to mail server to /dev/null by running “route add IP_ADDRESS_OF_MAIL_SERVER MASK /dev/null”

Finaly, we figured out a round about way to achieve this.. Since the main aim was to reduce the load on the firewall, we identifid an un used IP in the same network as the application server and added a static route to point all traffic going to the mail server to this IP. We ran the following command “route ADD IP_ADDRESS_OF_MAIL_SERVER MASK 255.255.255.255 UN_USED_IP_ADDRESS”

Might not be the smartest way to achive this.. but it did the trick.

As posted here, I have been playing around with the Beta version of Windows 7. Everything was working great, until I started getting Â a mysterious error “Installer stopped working”, when I tried to install any new software. A Google search, led me to this site (http://www.sevenforums.com/general-discussion/2349-windows-installer-cant-install-any-msi-package-4.html) . Here’s the solution to the issue.Â

I got a copy of the Windows 7 Beta copy from my colleague and installed it on my Lenovo X61 tablet. The install went through pretty smoothly and . upon booting up the computer, me and my colleague had the following conversation..

Colleague : (almost smacking me on my head) No..that is a Beta Fish!!

Looks like a smart programmer (or marketing person) put the picture of a Beta fish as the default background for Windows 7 Beta :-).. Here’s a screenshot.

Hopefully, Windows 7 will finally convince us XP lovers to upgrade. Vista is a failed operating system as far as I am concerned. Not in the league of “Windows Millenium“, but it is going to be shoved away into the annals of history soon if Windows 7 delivers as promised.

This is a howto for the geek in you :-). You can easily configure a AT&T 3G Wireless card on your workstation using the Communication Manager software provided by AT&T.. But then I have always been against using bloated software for something you can configure on your own.

I recently got a 3G card at work and needed to install it on my laptop. I figured that the AT&TÂ  provided software was just setting up a dial-up connection with specific settings. Guessing that some Linux geek might have already figured out what the settings where, I used the following search term in Google “Linux Ubuntu Configure AT&T 3G card”.. Lo and behold, the following link showed up http://redmonk.com/sogrady/2008/12/07/how-to-use-an-att-ericsson-f3507g-card-on-ubuntu-intrepid/.

Here are the steps, I follwed to configure the card in Microsoft Vista

If you need to edit documents, create spreadsheets and presentations… and don’t want to spend $$$ for Microsoft Office, download the latest version of OpenOffice for free and give it a try. You might be pleasantly surprised.

I wrote a post earlier about using OpenOffice as a free PDF Editor.. And that is just the tip of the iceberg of what you can do with OpenOffice.

Since OpenOffice 3.0 was released back in October, the software has been downloaded more than 10 million times. And we are close to hitting 20 million downloads..Here’s a live counter from the OpenOffice website 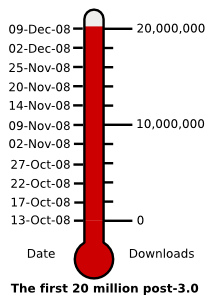 Here’s the situation.. you installed SSL cert on a website in IIS. You think you don’t need that site anymore and delete the site from IIS. The moment you delete it, you bite your tounge and remember that you are supposed to back up the SSL cert for future purposes.. But since the site has been deleted from IIS, you cannot export the key from the IIS manager!!.

Thx to Microsoft’s oversight (or potentially by design), you can still recover the certificate from the server.. Here’s how